When my triathlon season ended in September and I began to reflect on the year, I concluded that 2018 was a year of breakthroughs. Some of those breakthroughs were so big, that it was hard to explain how they could have happened. Then my friend Robyn told me about this phenomenon that exists in Belgian draft horse racing, and suddenly everything made more sense. Dave Ramsey describes the concept in his book, EntreLeadership.

“[O]ne Belgian [draft horse] can pull 8 thousand pounds. The weird thing is if you put two Belgian horses in the harness who are strangers to each other, together they can pull 20-24 thousand pounds…not twice as much as one, but three times as much as one. This example represents the power of synergy. However, if the two horses are raised and trained together they learn to pull and think as one. The trained, and therefore unified, pair can pull…30-32 thousand pounds. The unified pair can pull four times as much as a single horse…but unity is never simple or easy.”

I absolutely love this passage, in part, because it is nearly identical to my experience being on the US Paratriathlon Resident Team. When Mohamed, Howie, Allysa and I joined Resident Team in April, we all came in with different strengths, growth edges, experience levels, personalities, and communication styles. We knew each other well from years of racing together, but I don’t think any of us realized how much the squad environment would bond us.

Much like the Belgian draft horses, establishing group synergy was easy. It was the natural byproduct of being on a team. Synergy is why we could all be doing four completely different workouts and still be doing them faster than we would if we were alone. It’s why simply seeing Mohamed’s smile across the track (yes, that boy’s smile is so big that you can see it from 100 meters away) would be enough to propel me forward a little bit quicker. 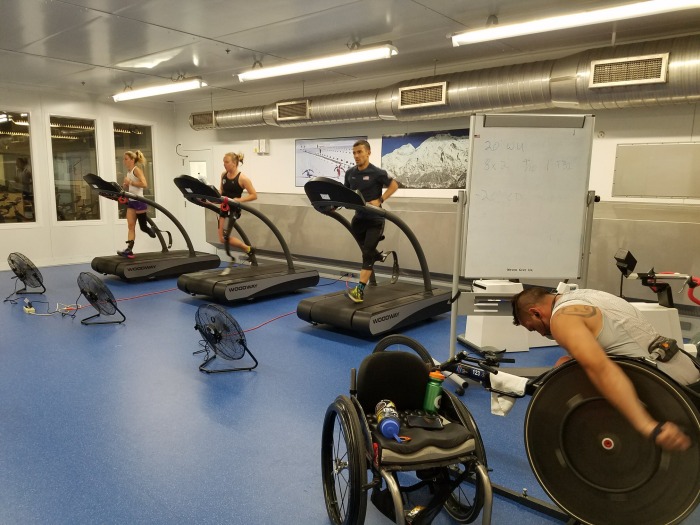 Unity, however, was never a given. Unity is harder to establish because it takes continuous work. It takes long-term vision. It requires everyone to sacrifice a little bit of ego with the understanding that it will go towards the larger goal of elevating the entire group.

Before I joined the Resident Team, I thought the idea of unity was one of those things that sounded cool in theory, but didn’t actually exist in the real world. I didn’t think you could put athletes who compete against one another in the same training environment and expect any good to come out of it. I thought trying to coach in that dynamic would be too messy, that the daily training would breed toxicity, and that it would make any kind of personal relationship between athletes impossible.

As it turns out, I couldn’t have been more wrong. While I may not have started the program with the most team minded attitude, it quickly changed when it became clear that the culture we were creating was one of encouragement and support. We developed this shared understanding that we would elevate ourselves to new levels of excellence by raising each other up. The foundation was simple: if a) the way to being a better athlete is by raising the bar of what is expected, and b) when I support my teammates, they will advance forward and effectively raise that bar, then c) the new, higher bar will ask more from me, forcing me to stretch my own horizons and become a better athlete. It’s enlightened self-interest in action. 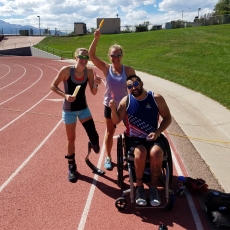 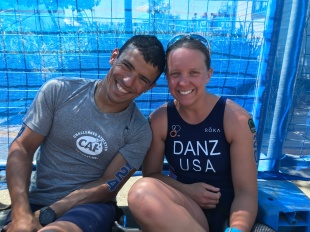 Within a month of training together as a team, all of us had made big performance gains simply from being surrounded by each other. And our unity only got stronger from there, as each of us used our strengths to help develop each other’s growth edges. As the season progressed, you’d see Allysa jump in with me in the last 200 meters of a track workout and tell me to stay on her shoulder. In turn, you’d see me start a few seconds behind Allysa on a bike interval and tell her not to let me catch her. You’d see Mohamed set the pace in the pool as Allysa and I fought to stay on his feet, to the point where she and I could swim next to each other, stroke for stroke, perfectly in sync, for hundreds of meters at a time. Like draft horses pulling four times their weight.

Like Ramsey observed, “unity is never simple or easy.” Achieving and sustaining team unity take constant work. The thing is, it’s not always easy to show up and be supportive of the larger goal. In fact, there were a lot of days where I just felt like being selfish. But being part of this group taught me that when those days came around, I needed to put my own self interests aside and show up anyway; to encourage others even when I wasn’t feeling good; to be proud of my teammates’ efforts even if I was disappointed with my own. That’s what my squad expected from me, and I expected the same from them. We were all willing to put in the work to be a unified team, and it shows. It shows in the performance gains each of us have made, and in the fact that we, collectively, played a large role in raising the level of competition at international events.

There have been so many touching moments throughout the season where my squad mates showed up for me; at times, they were so powerful that they brought me to tears. Day after day, we pushed each other to be the best versions of ourselves, both physically and interpersonally. I’ve said it before, but the entire reason that I do this sport is because I believe it’s a medium for personal growth. This team has helped me grow in ways that I never could have foreseen, and I’m grateful for all of the ways that they’ve made me a better human being.

Thanks for reading, and catch you back here next week for Part 3: How consistency made me a more confident athlete.